I know this update comes to you all late, and I apologize for that, however life has been very busy and with limited access to internet service except through my iPhone or iPad makes it hard.

Wednesday and Thursday was a pretty rough day for Doug and I! We never told Emily what she was going to have to go through the next day because we knew she would be upset about the stay at the hospital and would cry about it and we just wanted her to be happy up until the time she had to go. So, we told her that we were going to the hospital but left it at that. Our ride to the Ronald McDonald house was interested, the GPS took us through the worst part of Philly and the longer we were driving through the area, the more uncomfortable we got. The Ronald McDonald (RMH) was beautiful and amazing however it was the prettiest place in the worst part of town. It also wasnt the RMH that was connected to CHOP, it was connected to the other hospital in the area. Emily was crying and didnt want to be there, all she wanted was to get something to eat, so after arriving there at 810PM and checking the place out and hearing Emily more upset of the time we were there, we decided not to stay there and find a hotel. We knew once we left RMH we wouldn’t be able to come back, because they only bring people in up until 8PM, but what we didnt know was just how expensive the hotels were in the area. However we found a place to stay, stopped to eat dinner at Whole Foods and made it a night at the hotel for only 10 hours. A really good friend of the family, Regina (more like a sister to Doug, since he grew up with her) came out that night as well and met us at the hotel and spent the next day with us.

That night Doug or I didnt sleep well at all, but honestly who would knowing that their child would have to go through a major surgery the next day. We got up and got ready and after taking a shower, I walked into the bathroom and fell and my toe got caught underneath the door. From the shower the water sprayed all over the floor and it was wet. Needless to say on a day that was really important, I broke my toe. NICE. And I woke up Emily from crying out about my foot. Emily did very well about having to get up and get ready.

﻿
﻿
﻿﻿﻿That morning we were beyond nervous and scared. However I can tell you all that Doug and I definitely knew we chose the right place to take Emily and have surgery. Dr Mattei is an amazing Doctor and we could tell this before the surgery was even done. His bedside manner was not that of a doctor, it was of a very compassionate man who looked at each child as if they were his own. I cant tell you what that means to us and for any other parent. He met us back at the room as soon as Emily was taken to the room and started to talk to us and tell us what to expect, the anesthesia doctors came in and also did the same. While we were waiting Emily fell asleep on me which actually worked out nicely. Because they normally give the kids giggle juice and then they give them an iv in the arm but they didn't have to since she was asleep.  After I laid her down and she was out, Doug and I both kissed her as the tears were rolling down our faces! This day reminded me back on December 23rd when Emily was going through her very first surgery and we cried because we didn’t want them to take her. The anesthesiologist looked at both Doug and I and said she would be well taken care of...we both cried and held onto each other for a minute and then got ourselves together and then came out to meet up with Regina.  We left Emily at at 845 AM and tried to keep our minds on the task at hand. We received our first update at about 1030AM, we were told that Dr Mattei had just started working on Emily about 950AM and so far she was doing great, she wasn't having any problems.  The IV's were placed in both of her hands with no problems and she was doing great.  She had to receive both platelets and blood because they were both low, but her WBC was still great.  She was not eligible to get the epidural since her platelets were so low and it could cause problems, so they gave her morphine. Doug and I both worried about her and worried about the recovery and very worried she would be mad that we didn't tell her about this. At 1110AM, Dr Mattei came walking through the doors and said, "we removed all of the tumor and Emily is doing great.  We are now closing the cut back up with the stiches underneath and using the glue. Emily was also a bit dehydrated when she came back to them, so they were going to keep an eye on that"  Doug and I were both very happy to hear they were able to remove it all, and everything went well.  He did tell us that the tumor was a little difficult to remove off of the kidney and the aerta and that it looked like the tumor was very stiff because it appeared it was dying off.  That was the first we had heard it was even touching the kidney, so that was news to us.  Dr. Mattei did remove the adrenal gland, but we had already known he was going to do so. That wait for them to call us back to Emily, seemed like another eternity.  Finally at 1230PM, we were called back to see her.  We couldn't wait.

We both cried when we saw her, not because she didn't look good, but because knowing what she had just gone through and just wanting to talk with her.  The nurse was talking us through everything and letting us know her numbers and everything looked great.  They said they would be moving Emily to a single room on the Surgery Inpatient. 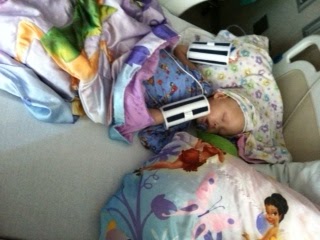 Emily slept most of the day Thursday.  When we talked to her she would hear us and answer by nodding her head or whispering, but that was really it.  Emily was laying on her side when we came to her and we had to move her to her back since she had been laying on her side for so long, and I move her to her back.  She had IV's in both of her arms and the frustrating thing about that is that she just wanted to rub my arm and couldn't. I even tried to the bandage off thinking it would help, but the IV was in the way and she was afraid it would hurt.  She she would have to tilt her arm and could only touch with her fingers.
It was a hard day for Doug and I, I didn't answer any phone calls because I just felt crummy and cried off and on all day.  I would look at Emily and cry and then Doug would remind me that they got it all and she is in a great hospital and they are taking great care of her. It was just really hard to see her in pain when she would have to move around or even be scared when the doctors would come and have to pull up her shirt and look at the incision.  She would flip out and get scared and cry out, but then would realize they are not going to touch her.
Friday she was still very sore, but much more awake.  She actually woke me up early in the morning and asked me why they put two IV's in her arms.  We laid on her bed and talked for about an hour and then she wanted Daddy to come and lay with her.  It was cute.  So he layed with her and then about an hour later, she wanted mommy to come back and lay with her.  Friday morning she had to actually sit up and at one point when they took the foley out she would need to get up and go potty.  Emily sat up with Doug and mines assistance and did amazing just like she did before back in December.  We only gave her the medicine that was like Tylenol, but no Morphine and we knew we would use it if we needed it.  But she didn't appear to show that she needed it.
I have been holding this post forever trying to get it all finished, so I thought I would go ahead and post this and post the rest later.  I still have more to talk about.  Emily is doing great though and she is home and resting and recovering.  Emily is one strong and amazing kid, Doug and I are so proud of her.  More to come later.
Posted by Emily's Family at 6/02/2011