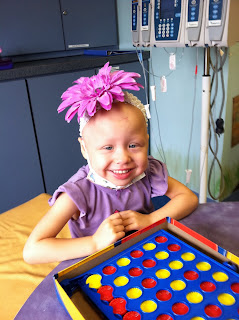 Its Thursday and Emily is currently napping, so I thought I would get a post in. Things are starting to settle in with the chemo.

Day -5
Wednesday wasn't a bad day at all, Emily overall had a pretty good day. Pop came to visit Emily and I for a little while and while he was here the doctor came by.  I talked to the doctor about Emily needing to get Zofran every 6 hours instead of every 8 hours and he was fine with it and was unsure why the overnight doctors had such an issue with it.
They check Emily's weight every morning and this morning it was more than when we arrived and I questioned it and the doctor said it was fluid and if she reaches a certain amount of fluid weight gain that we would have to give her Lasix. (sp), which I also questioned that I understand this could cause hearing loss.  He indicated that the amount Emily would need would not cause it, I don't want Emily to lose anymore hearing than she has.
Monday, Tuesday and Wednesday Emily received Thiotepa over 2 hours and then Wednesday along with the Thiotepa she received Cytoxan.  This chemo will run over the next 4 days, so until Saturday.
Overall she had a good day yesterday and Daddy brought the girls up again, thanks Dad, Emily is going to miss them.
Yesterday Emily and I were playing in the Playroom with beads and she just started to sing a Justin Bieber song "Down to Earth" without it actually being on.  It was so cute, so I had to record it.  If you want to see it, you can click hereor click below to play. She is proudly wearing her Brooke's Blossoms that Brooke sent to her.


Last night they did a count check Emily's counts are starting to drop, which that isn't unusual, but once she hits rock bottom she will be very immune suppressed, that we have to be careful so that she doesn't get any infections. Her hemoglobin was getting pretty low so we figure it won't be long before she will need a transfusion.
Emily went to sleep early last night, which she hasn't done in a while because she is always up later and I was able to get some work done and then be with her when she woke up later in the night.
Day -4
This morning Emily slept in and when she did wake up she was very attached to me moreso than normal the past couple of days.  She just seemed very tired and did complain that her stomach hurt.  I got her bacon for breakfast again this morning, but she didn't want anything to eat.  I was able to get her to do her glutamine and swishing, which is important since we really want to minimize the mouth sores as much as we can. Cytoxan started at noon and she got sick.  However afterwards she did eat a little some peanut butter crackers and a little bit of her dinner roll.
They continue to keep an eye on her weight, it did go up again today, but Dr. Gowda said he wasn't concerned.  He said side effects will really start to set in Sunday to Monday.  So not looking forward to that. He also indicated that her HMA/VMA levels had come back and they went up just a bit from the last time we did them after Round 2 (I believe it was)  He indicated this meant there are still some active cells.  Doug and I have a hard time hearing that because from what we read there are so many false negatives with this.
Today is the last day that Emily's sisters (or kids) can come and visit.  Dr. Gowda said children carry more infections and many times don't know it, and Emily would be safer not putting herself in danger of them coming.  I hope Emily doesn't have a hard time with this, she loves them so much.  I guess there will be a lot of skyping going on.
As for the rest of the evening, we will see how things go. Emily is still napping, her cheeks are red which we noticed, but she didn't have a fever.
Please continue to send your love, thoughts and prayers for Emily that this is an easy process and she goes through this smoothly with no pain and does ok.  Dr. Gowda indicated next week will probably be the worst week and I am not looking forward to it at all, and I know that Doug isn't either.  Its so hard to see them going through this.   Thank you Dad for bringing the girls to see Emily, this means so much to the girls as well as Emily especially, and even me.   We are going to have to figure out some shifting for me to go home in the evening next week to spend some time with the girls, unless Emily is really not feeling well and doesn't want me to leave.  As always we are taking things one day at a time and just trying to make things as easy as possible on her. For a 4 year old, she is such a strong little girl and she just amazes me at her power to do things.  The care partners here who take her vitals are just amazed that she doesn't fight to do anything and easily give them her leg or lifts up her arms to get a temperature.  She is a strong girl and a fighter, she is going to fight this. 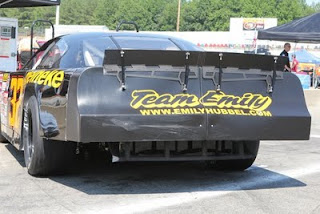 Since I can't post two pictures, make sure you check out on the blog at http://www.emilyhubbel.com, what I am going to post.  Doug met an very caring guy at Meineke, Todd, when he had to take his truck up there a while ago for an inspection and the second time coming back with his truck, Todd saw the magnets on the back of Doug's truck and asked who they were referring to and Doug said my daughter.  While Doug was waiting, Todd pulled up the page and began looking at it and also indicated to Doug some of the stuff that he is going through. It seems it may have been a month or so later when Doug had to take the van up there to get inspected, Todd told Doug that he has half ownership of a race car in South Boston, VA and had it put on the back of that car.  Tell me that isn't awesome.  Spread it about and tell everyone about Emily, she is an amazing girl, oh so strong and just fighting and doesn't even know what she is fighting.  I will post a picture on www.emilyhubbel.com so make sure you check it out.  Todd thank you so much, it really means so much to us that you did that and you think of Emily.  How amazing. So, spread the word tell everyone about Emily, tell them to check out her page.  This week from the 18th through the 24th is International Neuroblastoma Awareness week.
Thanks to everyone for leaving love, thoughts and everything that you do.  Emily will be excited to start getting cards, so again thank you to everyone it means so much to us.  More than you will ever know and it is so hard to express.


Also I try to do small updates on Emily's Journey Facebook, so make sure you like her page so that you can be a part of it.  Tell everyone about the page.
Posted by Emily's Family at 7/21/2011