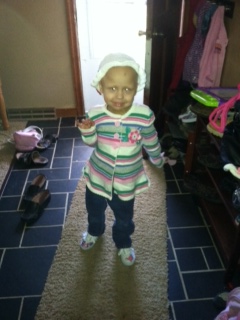 There is no place better than being home, and Emily was able to go home on Wednesday of this past week, 21 days at the hospital, 2 weeks after she received her own stem cells.  She is happy to be home to say the least, as our we.  The doctors did send her home with TPN (thankfully no lipids (fats) this time) and quite a few medicines.   One of the medicines linezolid, which is an antibiotic that Emily needs to take, was really expensive to get orally, so they were able to get this medicine to take by IV.  So, she has to take this medicine by IV every 8 hours.  Critical Care came to the house to drop off all her supplies, TPN and antibiotic.

Emily is doing well, she had her clinic appointment Friday and so far she is maintaining her counts of where she needs to be and her White Blood Count didn't drop much after being off the GCSF, which is awesome after having not received the GCSF since Monday night. Her platelets dropped a little, but these are the ones that take the longest to start working.  But the best part of this is that Emily's stem cells are working. We did learn that Emily has adenovirus.  She was tested while in the hospital last week and it takes about 5-7 days to come back and it came back on Friday, positive.  Adenovirus is a group of viruses that infect the membranes (tissue linings) of the respiratory tract, the eyes, the intestines, and the urinary tract, and is normally the cause of the diarrhea. At this point we are not asked to do anything different for Emily, because the clinic tested her again on Friday and we should get those results next week.  If they come back positive again, at that point we will need to take a different action.  She is on the Linezolid which is one of the strongest antibiotics as well as the acyclovir which is another antibiotic.  There is a medicine that you can take when you have adenovirus, however the problem with taking this type of medicine is that is causes severe dropping of counts which at this point is not something that they want to do, because she was just given her stems cell 3 weeks on Wednesday.  From what the doctor says it appears that she picked this up from the chemo, low counts and several antibiotics.
Friday, Emily had her MIBG scan as well as clinic, which is a test used to find tumors of a specific origin, neuroblastoma.  Scans based on the study were not to take place until after radiation has been completed, however Emily's doctor wanted to see where things were before Emily started radiation.
I know many of you are wondering where we are with traveling for radiation to either Mass General or MD Anderson, as well as everything else, at this point, we are at a standstill, waiting for information. We have an appointment tomorrow at 2pm to meet with Emily's doctor and we should know more information.  I know not what everyone wanted to hear at this point, but trust me, its not what we wanted to hear either, more waiting!! Neuroblastoma is such a nasty beast, that Doug and I want to make sure that whatever we do that we are making the best decision for Emily to beat this. It has already been a very long road and we know we still have a very long road ahead of us.
Today is a special day, today is Doug's birthday, Emily's daddy, my husband.  So, while we have a lot on our mind, we are celebrating a special day with a special man, father, husband.  We have family coming from Baltimore today and we are looking forward to spending time with them. Emily is looking forward to spending time with Nakeyah, since it has been a while since we have seen them.
I do apologize for the delay in updates since we have been home. However Brianna has turned in to a major night owl, not going to sleep until anytime between 1 - 3 AM which I like to update after they are in bed, but it has been hard to do so.  We are happy to be home with all the girls and everyone be together.
Thank you for all the special packages of cards, gifts, love and support that you all send to Emily and/or our family.  They mean so much to Emily and she gets so excited to get mail.   Thank you to all who has been so special to us and to leave us special notes, sending us gift cards and being so special to all of us.  The love from all around the world, it absolutely amazing.  I have to be honest and say if it were not for all of you, our family, our friends, we wouldn't be where we are today without all the love and support.  So, thank you!!!
We will update more once we know more information.
Posted by Emily's Family at 10/02/2011