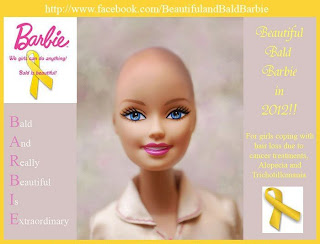 Wednesday night we met with Channel 8 news to do an interview about the Barbie.  Emily was too shy to get on camera, so it was just Doug and I. The interview was about an hour long and the clip was about a minute long. Check it out on Channel 8 News.  It turned out well, and it really got out the points that mattered.  It was a great start to The Hubbel's promoting Childhood Cancer Awareness and making people aware of Childhood Cancer and of our daughter.

Thursday night Grey's Anatomy had a case of an inoperable neuroblastoma case.  We were thinking this is great something else to get some childhood cancer awareness out there.  While, I think it put the awareness out there, we just think personally it wasn't portrayed like it really is.  While I know we have too much time invested in this, that is different, we were hoping this would have given people the awareness of it. I was disappointed, they only said neuroblastoma once in the 1 hour show and didn't even show the boy with no hair to show that prior to surgery that they had even tried to get the tumor to shrink. I just think it was botched.  I will give it up to them, at least they tried.

Emily had clinic Tuesday and Friday of this week and both visits required platelets transfusions because her platelets had tanked.  We were shocked that her ANC and WBC had tanked so quickly so she is already back on the GCSF to try to booth her immune system back up. Lately Emily has only seen the hospital and home with her low counts and I know she is over just being home all the time, but being hospitalized right now with a fever is so past where we were.  Emily's energy is very up and down and she is quickly tired, so we both thought both times she would need a blood transfusion, however she did not.  We were able to meet up with Dr. Gowda today and just talk about Emily and is what is happening.  He said he has received the news that Emily's scans were stable and that she went through with MIBG Round 2 and that she would need her stem cells given back to her. Dr. Gowda asked Mosse if they had a plan after Round 2 of MIBG Therapy and she indicated that there is currently no plan at to what is next until Emily has her MIBG on February 21st, and they receive the results. NO PLAN, scary. Mosse indicated to Gowda that we were advised to give Emily a good "quality of life".  We talked about options, we talked about what was out there and just really putting things out on the table. Doug and I actually felt today was the first time we actually felt like Dr. Gowda was geniune and cared.

Doug and I have been reading a lot lately. Reading on where to go next, what to do next and what to do.  We are not stuck at staying at CHOP, we are not going to stay there if there is nothing that we can do. As for when we got the stable results, we were told as of that day we had no other nexts at the moment because she didn't qualify for anything because of her platelets. We are very interested in Sholler and I will have a call out to her next week.  Sholler has a great background and has some great things out there.  We are also interested in talking with Kushner at Sloan. When we were there for a 2nd opinion, Modak left a bad taste in our mouth, and we are still iffy on Sloan, but we can't shut it out either. I have to say that as much as Doug and I really don't want to, we don't want Emily to have to go through chemo again.  We just want her to be done with that side of things. However I think we will go with whatever will work, but as parents we just don't know where to go right now.

Monday we head into VCU and Emily is inpatient for the day to receive her stem cells back.  We should see engraftment within 10-14 days and this is really want we need for her platelets.

That is all for tonight, I know that many of you have been waiting on the link for the Channel 8 News, so please continue to spread Childhood Cancer Awareness and about our Emily.