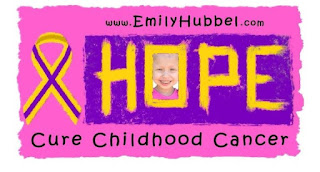 Its been a while since we have updated, and mostly because its been a lot going on and we have been busy. Last Thursday Emily had clinic and it was a pretty long day.  That morning Emily complained that her legs were hurting and she wouldn't walk from neuropathy, so she had to be carried out to the car. She lost about a pound and Daddy and I decided we would stop the Nifurtimox knowing that if we didn't she would continue to lose weight and they would win the battle this time and admit her. Emily had been doing a lot of sleeping since her last time at the clinic, which we let them know, and when counts came back Emily needed both platelets (at 5) and blood (at 7.4). She was given benadryl because of her allergic reaction to the platelets, well an hour after giving her platelets she had another allergic reaction, but it seem to go away quickly and they were able to start the blood back up.

Thursday evening Emily started to complain mildly of a headache, but because she was tired and just wanted to go to bed, after a long day, I figured it was just from that.  Friday she complained that her ears were hurting, she was given tylenol and a little later she was still complaining.  By evening, she was complaining it was only one ear and it was hurting pretty bad causing her to cry. We talked to the Dr. Gowda and checked to see if it got any worse would it be ok to take her to KidMed as long as no fever to check her ears.  He was ok with that.  She moaned and groaned all night, but Saturday morning she was complaining the back of her head hurt again and she was holding ice to her head.  We tried Tylenol and after a little while she was still complaining, so we called the on call to see if we needed to bring her in.  They were not concerned or didn't seem concerned since she didn't have a fever and wasn't throwing up and said we could give her a little something stronger than Tylenol, like Tylenol with Codene and wait to be seen on Monday morning. We ended up having to give her this a few times and some over night, because of pain.  Sunday, she wasn't complaining as much about her head, but was complaining about her right upper leg near one of her spots that she has had since diagnosed. She wouldn't walk and when she was she would limp and wanted ice for her leg. It hurt to touch.  We did look at her leg and didn't see any bruises and didn't see

Most of the weekend was watching Emily lay on the couch, she didn't want to be messed with and she didn't eat much either. She slept a lot and complained of pain.  Of course this brought Doug and I's mind to what in the world is going on?  Progression? What could it be?

Monday morning she had clinic again, and we were going to let them know about our weekend.  Emily was still complaining her leg was hurting and Daddy thought maybe it is from the Zometa.  The problem with the Zometa, we knew we couldn't ask them, since they didnt' have any experience on giving it, so we would talk with Dr. Sholler about it. As I walked in with Emily, Elaine, our nurse, asked how the weekend was and said she heard about the calls that were made. So, she also had some concern about what was going on. Counts were checked, and because of the concern of the leg, Dr. Gowda ordered a xray just to have it checked.Platelets low again (at 8) so she would need them when we got back.  Xray was done and reviewed and we were advised that she doesn't have a fracture, and that there is only abnormality of the bone, but they don't know what the abnormality is from.  Whether it be from radiation, from the spot or from the disease doing whatever. So, while the Xray only gave us good news in that there isn't a fracture, it didn't really let us know anything else, and they can't really compare anything because VCU doesn't do scans.  It was said send her home after platelets on Tylenol w/Codene and we will revisit this on Thursdays visit and see how she is feeling.

Emily is finally starting to come around again, coming off the couch just a bit more and actually trying to eat a bit more.  She isn't complaining as much about the pain in her right leg, however it still hurts to touch and she isn't limping much, but you can tell.  She freaks out when you try to touch it, but isn't complaining about it much. As of Monday she was still neutrapenic, so we have been hanging low at home, together as a family.

This cancer journey is a journey that is hard, hard on everyone in the family! Not only do we hate cancer, we hate everything that comes a long with it.... When little things like this happen to Emily, our minds immediately run to the worse and we hate that, but it is what happens.  While we are not sure what is causing the pain, and why it still hurts to touch, we are hoping that as her counts go up, that she will feel better and the pain will also go away. Right now only time will tell and we will see how things go.  We will see how she is doing when we go back for counts on Thursday to check things out for her.  Dad and I try to remain as positive as we can, but sometimes it is hard, but we are trying really hard to be positive about this.

We still get emails on where to send donations or where to send things, so I just wanted to let you all know, thank you for everything that you do for our family and for all the lovely things that you have sent Emily to bring a smile to her face.  Thank you!.  If you want to make donations, you can go to www.emilyhubbel.com and click on the donate button or you can mail them to:
PO Box 5383
Midlothian, VA 23112
Your generosity and love means so much to us, and we just want to say Thank you!. I don't feel that we can say Thank you enough to all of the wonderful things that so many of you do for us.

We will update you all to let you know how Emily's appointment goes on Thursday and how she is doing.  Her spirits are starting to pick up some and she is starting to smile and laugh here and there.  She has grown very attached to mommy lately and hasn't wanted mommy to go to work in the morning, which makes it really hard to leave.  We are so proud of her and all that she does.  She is really ready for treatment to be over though, and she has made that very clear to daddy and I, she just wants this to be over.  We are right there with her, and hope that we will have an end in sight, but at this time, we just don't know. Her saying she was done with treatment, and didn't want to come to clinic anymore, brought tears to Daddy's eyes, because we wish we could be done with this too.

Sorry for the long update and if this update seemed all over the place, but thank you for hanging in. Remember to hug and kiss your kids and tell them how much you love them, you never know when one day those things can change.
Posted by Emily's Family at 7/31/2012