Another week of visiting the clinic twice a week.  Both Monday and today have been long days in the clinic for Emily. Monday Emily had clinic to check counts and she needed both platelets and blood.  Platelets definitely because her gums were bleeding when she was brushing her teeth along with bruises , but I asked that they do a blood transfusion since her blood counts were dropping so much and didn't want to make a trip over the holiday. After giving her the platelets transfusion while waiting for the blood, we were talking with a couple of other families and I noticed a bump on Emily's forehead, but thought it was just a bug bite, since she said it itched and one of the nurses saw it and said Emily was having a reaction and she had a few other places on her head.  She hasn't had a reaction in over a year, we were all shocked she was having a reaction an hour after the platelet transfusion had stopped, so they had to give her benadryl and wait for the bumps to go away.  By this time it was too late to even start blood, so it would have to wait until Emily's next appointment on Thursday.

Emily did have a nice 4th of July and we all together as a family, which is really what it was all about.  Tuesday evening we went do to the James and saw the fireworks and enjoyed the works and then the 4th of July we cooked out as a family and enjoyed spending time together in the pool together.  It was a great time to spend together with one another and have each other.

Today another long day of needing blood and platelets.  Blood dropped quite a bit from Monday to today and it was quite noticeable this morning.  She was very sleepy and out of it. Later the benadryl to get platelets didn't help that.  However after some blood, Emily's color looks much better.  We worried about leaving platelets at 18 when Monday they were 14 (with platelets) and not getting any.  So we did request that she get them, because bleeding scares me.  I worry that she ever hit her head and starts bleeding and we can't stop it.  T.he head is one of the biggest worries.   Anything under 50 is just dangerous to play around with anyway.

Next week is scanxiety week.  Its been a long haul to figure out when scans were because they kept being changed from week to week and what days, but it appears that they have been scheduled for MIBG Injection on Wednesday with scan on Thursday. Scans for parents are always a huge worry, especially when on a clinical trial with a doctor away from home. We will leave on Wednesday morning and return Friday sometime. 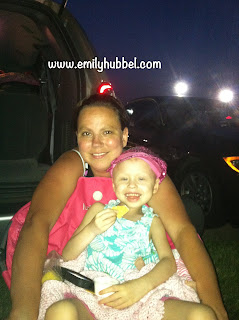 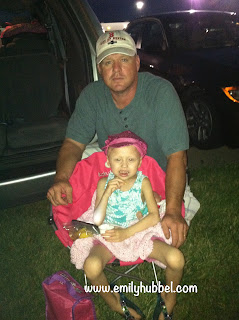 We watch Emily blossom and turn into a young lady so quickly.  The things that she knows are beyond her age and we are just amazed at how well she takes them. Just in February Emily had her broviac line taken out and now has a port which has to be accessed each time. Emily's anxiety builds each time she has clinic and she stresses and worries about the port being accessed.  Daddy and I are so proud of her as the past 2 times this week that she was accessed, that she barely made a peep.  She was accessed and did amazing.  emily we are so proud of you, you continue to blossom and grow and while we would give anything that you didn't have to go through this, you still continue to amaze us in your journey. I watch Daddy look at Emily in awe of all that she has had to endure and the way that she handles it. She handles this journey with such ease and we are so proud of her.

Emily gave her first Team Emily bag away on Monday to a little girl who was just diagnosed in May of Medulloblastoma, her name is Emily also.  Emily is such a sweet girl and we love their family.  If you would like to read more about Emily, you can read about her here on caringbridge: EmilyGriffin.  While I wished I had taken a picture, it was just as sweet to see Emily give away her first Team Emily bag.
http://www.caringbridge.org/visit/emilygriffin/journal 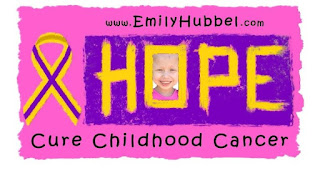 Hope.  We are hoping for stable or better for scans next week and out of all seriousness we would really like to see better with continuing to see HMA and VMA low.  Better would be what we would really like to see, because if no change, we are really going to have a talk with Sholler about whats next and if continuing on the trial is the right thing to do when there is no change.  Of course the biggest worry is change meaning progressing, because... well I don't want to get to ahead of ourselves.