Wow its been a month since our last update. OOPS.

We had originally planned on doing three rounds of the Avastin/Irenotecan/Temador trial from the last set of scans in July to allow Emily time at home and more time at school. Last year on the first week of school, she was in Michigan getting scans, so she didn't get to really figure out what school was all about not being there the first week. We wanted Emily to enjoy life outside of the hospital and with her friends where she belongs.

Like I said we had originally wanted to do 3 rounds so she could have about a month at school, but always true Emily style, that plan changed. Dr Gowda (VCU doctor) was concerned about her platelets not recovering. For round 7 Emily was needing platelets once a week because they were not recovering we even made round 7 a 35 day round instead of the normal 28 day period we had been doing. So with the concern of the platelets Dr Gowda asked that we go back to Michigan after round 8 to have her bone marrow checked for NB cells (the last one was done in December when we learned she had progression) and MDS and also have scans done. Round 8 started and last week (the first week of school) was the first week Emily hasn't had to get platelets. Platelets did drop a little bit this week while in MIchigan, but nothing needing transfusions.
Michigan was planned for September 12th and 13th to fit in clinic, meeting with Dr. Sholler, Bone Marrow Aspirates/Biopsy and scans. They normally don't do MIBG/CT Spects on Friday, but Emily's was scheduled for Friday and Dr. Sholler wasn't scheduled to be in Friday. We were concerned about not getting results, but was told several times they would make sure someone read the results to us before we left and before the weekend.

Emily had her bone marrow aspirate/biopsy done on Thursday (yesterday). We couldn't be more proud of her for handling it so well. She was so calm about the procedure and she was answering questions when they were asked and even smiled as she was getting her propophol (which isn't like Emily at all, because she hated getting the "white stuff" which is what she calls it). But she really handled it so well. She woke up from her sleepy medicine and wasn't grumpy like so many previous times before. However she was in a lot of pain, she cried that her back hurt pretty bad.

We did talk with Dr Sholler to go over the "what ifs" since she wouldn't be in on Friday so that when we received the results, we could make a decision on what we would do.

Emily had her MIBG/CT Spect scan this morning. And as always she did an amazing job. I can't tell you how proud we are of her and all that she has endured and continues to endure. She handles everything that she has to go through with just grace and always has a smile on her face. Although her back was still bothering her Emily was able to lay still for an hour and a half and not move. How can you not be proud of her. She rocks. 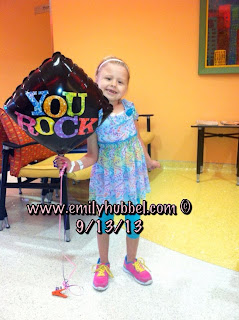 Well we came back to clinic after the scan and waited and waited. The nurse practioner came in and said the scans had been loaded, but no preliminary results were given in reference to the scans and she couldn't tell us if the scans looked better or worse or if there was any progression. Because Dr. Sholler wasn't there, there was no one there that could read the results to us to let us know where Emily stands. Needless to say we were not happy that nothing was reported to us. After scans we waited two hours to get nothing. We were told we could stay the weekend and meet with Dr. Sholler on Monday to get the results, but it wasn't something that we wanted to do when we both need to get home. So at this time we wait until Monday to know the outcome of the scans. I could go into what we really felt and how upset we were, but it won't change anything or give us the results. So we should have complete results by Monday sometime that we can update with.

We love this little girl with all our heart. She is handling everything so well, and we couldn't be more proud of her. We will continue to walk along with her on this journey and hold her hand and fight with her.

Please check back later for results.


Remember to hug and kiss your kids and tell them how much you love them.
Posted by Emily's Family at 9/13/2013