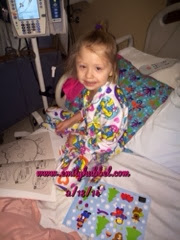 In more ways than one...
Last night the chemo was stopped for the night while she was inpatient! Also the packing (gauze) came out of her nose along with a huge clot last night! The concern was that it would cause some more bleeding but thankfully it didn't! By this point she had already had her platelets and was half way done with the blood transfusion late last night. So we are keeping her nose sprayed with hopes that it won't cause any more bleeding!
A PT TTP test was done yesterday to check Emily's clotting factor. It was just a little high so they wanted her to take Vitamin K with hoping to bring that down. GI came by today and we spoke about what is going on with Emily. The concern is that she may have some intestinal bleeding since she has had some really dark stools!  They would like to do an endoscopy where they take a camera down her throat and see if she has any tears, ulcers or infections that is causing the bleeding.  They asked if we wanted Emily to stay inpatient tonight and have the procedure done tomorrow, but we also learned that Emily is real close to neutrapenic! Her ANC is 800 and neutropenic is 500! So doing a procedure like this would bring some concerns of other infections and landing herself longer inpatient.  So we opted for having the procedure done next week. They also wanted to have no bleeding for 48 hours so if any bleeding overnight the procedure would be off. Check her counts in the morning and her PT TPP levels and if that is still elevated it would be held off. So a few factors in deciding but felt next week would be better and also hopefully give emily some time to start eating more and her ANC to start coming back up. But with a low ANC we will be sticking around the house to keep her free of getting sick! So Homebound #1!  We have been told if any fevers of 100.4 or above that we need to bring Emily back. We didn't expect to have to worry about this with these new medications but here we are. And now we just have to deal with it! So this means no school for the remainder of the week hopefully she can attend the father/daughter dance Friday but we will have to see how her ANC looks. We also don't know to expect her ANC to fall anymore with these chemos so we don't know what to expect moving forward!
They did release Emily today from inpatient to home (Homebound #2) and we got to leave at 130 pm but with several medications that we had to stop and pick up at cvs. Her hemoglobin was still low today, 8.2, so it's possible she could need another blood transfusion come later this week. Platelets are ok but they do drop quite a bit for Emily! Her 2 chemos can be restarted again tonight along with Zofran every 6 hours, karofate, another prescription and her nose sprays along with using a humidifier! Obviously if we experience throwing up blood again we will have to go back.
So right now we hang at home and Thursday Emily will have clinic with dr gowda to see where she is with counts and he can look over her and see how she is doing. Thursday afternoon we will meet with ENT to see if there is anything else that they can do to help Emily! Monday she has the appointment at Stoney point for the endoscopy which means no eating so she can go under anesthesia and have the procedure done. Hopefully we will know the results quickly from this and how to move forward but hopefully it doesn't change any of our treatment options if there are any problems!
We are working with the county and the hospital to get Homebound set up for Emily so a teacher can come and work with her here at the house. Homebound #3! Her teacher did send some work home to start working on until we have Homebound set up, not sure how long that will take but hopefully not long!
Please continue to keep Emily in your thoughts and hope for no other inpatient stays! We are hopeful that she doesn't have any other throwing up and can do well until Thursday morning as well as no fevers!!
Thank you so much to all who continue to follow along with Emily's journey and text us, email us and check in with us. Your love means so much to us!
#emilyhubbeldotcom,
#emilysjourney,
#neuroblastomasucks
#cancertreatmentsucks
Posted by Emily's Family at 2/18/2014