End of Round 6 Nifurtimox Trial

It is hard to believe that today Emily finished the 6 round trial of Nifurtimox, it was a long 6 rounds. Overall she had a good week, she had a day where she didn't eat much and fell asleep early and a night where she felt like she was going to get sick. But overall, she handled the week really well and in Emily style, with a smile.

Thinking just one year back, Emily had just come home from her 1st transplant on August 8 and would be admitted September 7th for her 2nd transplant, hard to believe one year has passed and Emily is not completed with treatment yet. Thinking back during that time, was really hard for us, with Emily being at the hospital for 3 weeks both times and not getting much family time together. It was just Doug and I doing all the work to keep our family together as much as we could. Just so hard to believe that we are one year passed this.

Her counts have already started to decline, but that is to be expected and we expect to see them hit rock bottom come Monday. So, we are being extra careful, because we don't want to see her like she was Round 5. For 2 and a half weeks after Round 5, she was down and spent a lot of time on the couch.

Today we both went to clinic, because we were supposed to meet with the Education Liaison through the hospital, for some reason she didn't make it in. After speaking with a few people though, many think it would be better if Emily didn't go on the first day of school and especially if the Education Liaison hasn't talked with the class. Doug and I talked about it and we agree, because the first day is a bit hectic and we would really like for the class to be talked with to understand about Emily. Doug and I are both nervous about Emily starting school, but she wants to go to school and we want her to go and things be as normal as possible.

We are still waiting on confirmation of dates that we will head to Michigan, and also waiting to hear if Emily will need a complete re-evaluation with bone marrow biopsy and the whole 9 yards. Emily will also have a hearing test next month as well, since it has been about a year since she has had one.

Just wanted to give a quick update of Emily and how she is doing, she is already asleep tonight beside me and Brianna is trying to fall asleep. It has been a long week and we are looking forward to hopefully sleeping in and just enjoying time together as a family at home. Tonight she will get her last bag of fluids, and then tomorrow I will deaccess her. Its hard to believe that Doug and I have had to learn to be nurses at home and take care of Emily, but we do it with ease. It was never something we thought we would do. Emily will return to clinic on Monday for counts check and neulasta shot, where it may be a possibility that she will need platelets.

We will continue to keep you updated, please hug and kiss your kids and tell them how much you love them. 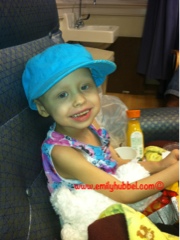